Documents here are aimed at rowing and taking charge of rowing craft.

While no ratios are formally laid out at the moment prudence suggests that the sky is not the limit. An Intermediate Charge Certificate holder can take charge of a boat they are not actually sitting in while in Safe Enclosed Waters, but how many such craft?
Common sense would suggest that about 12 people per Charge Cert holder is a reasonable limit. It represents the crew of 2 BP18s or East Coast Skiffs, for example.
If a single Charge Certificate holder is taking charge of a flotilla of punts prudence would again suggest a limit of not more that 5 craft per charge certificate holder. 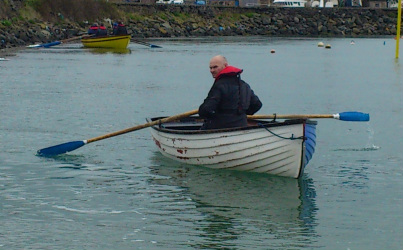 What should we do to protect oars from the elements?

It really doesn't matter what you put on it if the surface isn't well  prepared. All lose material removed, wood sanded back to sound wood. Make sure  they have had a good while to dry out beforehand otherwise you just end up trapping any moisture under the varnish which will inevitably lead to the wood rotting and the varnish falling off.

It needs to be a yacht varnish. (for UV stability and a bit of  flexibility) The range of prices is huge and most of the value is in the
pretty colours on the tin.
Spinnaker Standard is my first choice. It's not terribly  expensive and performs as well as any of the others that I have tried.

As an alternative, a million coats of Boiled Linseed oil (still on  prepared surfaces) has the advantage that it is very easy to maintain. A rub
with an oily rag from time to time will keep them in perfect condition.

Another alternative which is gaining popularity among the boating community (although my own observation where I have seen it used is that it isn't great)  is to use something like Sadolin which is a moisture permeable barrier. The  advantage is that it is supposed to allow the wood to breath but in a  permanently damp environment I fear that it will allow the wood to breathe in as well and raise the moisture level to the point where decay can commence.

On the whole I would still go for Spinnaker yacht Varnish unless they are very old and discoloured oars in which case boiled linseed oil would be my choice.

It is traditional, but not necessary, to paint the blades of the oars (usually in the colours of the group neckerchief). This is done with regular gloss paint over the appropriate undercoat.

Whatever you do put on, it is best NOT TO put anything on the grip of the oar. Sweaty and oily palms are enough to keep the wood treated and it (slightly) reduces the risk of blisters on tender hands.

(Links are for information. Not a commercial endorsement. They didn't pay to get mentioned)